Bleed For Us To Live

Release
Bleed For Us To Live 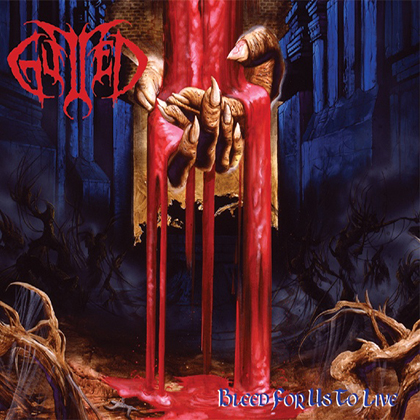 Out of print for years, Repulsive Echo’s, Kostas has brought us back both releases from Toledo Ohio’s Gutted.  Gutted were a death metal band…
– read full review @Teeth_Of_The_Divine –

It’s really hard to believe that such a devastating album remained so unnoticed and I myself haven’t even heard of GUTTED until 2008! The only explanation I can find is that I’m not the only one, as this album must have had really shitty promotion at the time of its release. Real shame, as nowadays I can say it’s one of the best (!!!!) death metal albums that came from the American scene at the time; it even equals such masterpieces as “Leprosy” or “Human Waste”. From my first listen of “Bleed For us to Live” I was hooked, these claws from the cover caught my guts and ripped them unmercifully. Absolutely killer stuff.- read full review @metal-archives.com –

The creativity, originality, and variety found on records such as this is what seperates that early period from the monotonous, repetative stuff being churned out by generic death/grind bands today.
Gutted play a very unique style of classic death metal that blends death, thrash, doom, and even groove elements together to form the final product. They switch seamlessly from blistering brutality to Kreator-style riffage and again to some very crunchy, doomy sections. What this results in is an album that is varied, does NOT get boring, and is very easy to listen to from beginning to end. There is not an ounce of filler on here, and I can honestly say that I would have loved the album to go on for at least another track or two.
– read full review @metal-archives.com –