City of the Dead

Release
City of the Dead 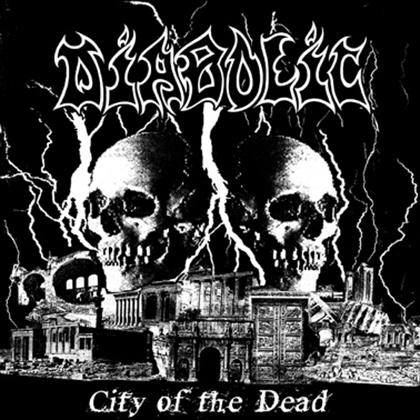 Includes the 1997 3-song demo “City of the Dead”,
2 bonus demo tracks “Inborn” and “Encarta”,
covers to Morbid Angel and Slayer classics
and a brand new 2013 song exclusive for this release!

All songs remastered for vinyl and poster.

Diabolic has reissued three songs from their “City Of The Dead” demo from 1997 along with three never before released studio cuts along with two cover songs: Slayer’s “Gemini” and Morbid Angel’s “Visions From The Dark Side”, which are ghoulishly done in the Diabolic way. This vinyl release is also called “City Of The Dead”, and it is a solid and brutal representation of Diabolic’s humble beginnings as an old school death metal band with that cryptic/ancient feeling of total darkness and anti-religious themes. Aantar’s drumming on the eight tracks here is 110% blasphemous and wickedly executed for your total headbanging pleasure. The other members of the band are just as tight, hellishly sick and insanely twisted. The vocals alone on “City Of The Dead” will make you cough up that Satanic Ceremonial Blood you drank during lastnight’s human sacrifice.
– read full review @explicitlyintense.com –

Repulsive Echo is relatively new underground label from Greece that already has proven its worth with several great releases. They did some killer vinyl and CD reissues of bands like Gutted, Malevolent Creation, Solstice, Demented Ted, and also released new album from Brutality. And I know that Kostas, who’s behind this label, has plans for more interesting releases. The first vinyl, which Repulsive Echo released though was “City of the Dead” demo by blastmasters from Florida, Diabolic! And wow, what a good start it was for Repulsive Echo. And even better for Diabolic…
– read full review @Panzerfaust –