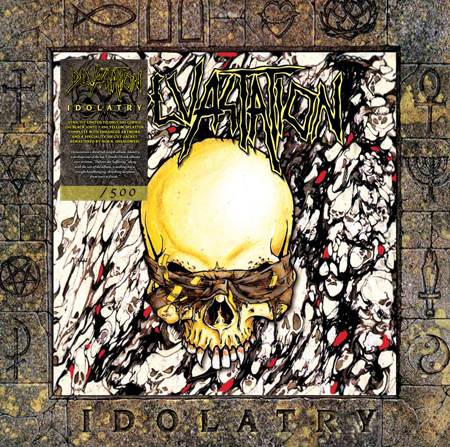 B1 Idolatry
B2 Legacy of faith
B3 Subconscious
B4 Never believe

Sometimes music cannot be described with words, it simply takes your breath away and you simply enjoy it with all your heart. Fortunately this is not the case with Idolatry, here you do not weep for the glory lost or little fluffy kittens that got killed, here you fucking bang your head! This album cannot be compared to Beneath The Remains, definetly, it’s so superior that it could only be compared to world destroyers like Time Does Not Heal or Spectrum Of Death, perhaps not as good, but very, very close.

Not only did they fuck my brain, they fucked all of you and comanded you not to deny the beast inside, but to let it loose – thrash is the ultimate punishment that god, or satan, came up with and they gave the key to Slayer, Overkill and Venom. Slayer got lost, Overkill kept on thrashing and Venom… well… Venom decided to screw the rules and created the most fucking lethal version of thrash ever made, thus giving birth to Possessed, who ultimately gave birth to bands like Morbid Saint, Dark Angel and Devastation…
– read full review @Metal-Archives.com –

After having been given the remaster treatment and a beautiful reissue on LP through Repulsive Echo records now is the perfect time to rediscover this hidden Thrash gem. After building their reputation through the US underground Devastation entered the legendary Morrisound Studio’s with Scott Burns and recorded their third and final album “Idolatry.” Released in 1991.
– read full review @Brutalism.com –