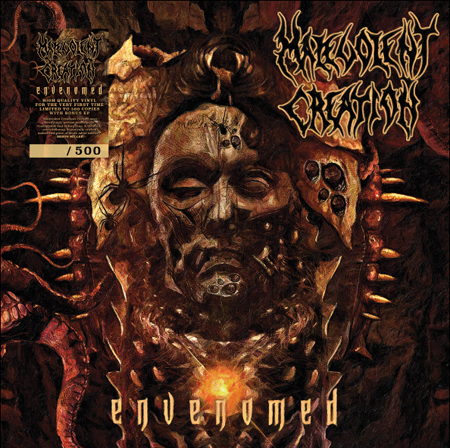 Limited to 500 copies both versions numbered

Remastered for vinyl by John Hall at Full Sail Studios

Recorded, engineered, mixed and mastered by

Drums on track 8 by Gus Rios

Malevolent Creation has been around for nearly 30 years and they have always crushed it, their albums are consistently brutal and you know exactly what you are getting when you buy one. Of course, when you have 12 albums some are going to be better than others. Every deathmetaller knows THE TEN COMMANDMENTS and RETRIBUTION are…
– read full review @Metal For Everyone –

Three decades have past, still around, Malevolent Creation are surely one of the most important death metal bands in history with their brand of thrash/death that inspired a lot of bands and released some classics like “The Ten Commandments“ or „Retribution“ to name a few. Fast and straight forward death metal with balls and tank like groove parts was and is their true force as well as giving enough variation to the songs and still making them memorable and in the same time brutal as hell. „Envenomed“ was released originally in 2000 and marks album number seven in their discography. Not being available for a few years no Repulsive echo Records finally released this album again on CD and vinyl. This album is the last with Brett Hoffmann before being replaced by Kyle Symons for a few years and the rejoining the band in 2006 until this year. The lineup is killer and sees the band harmonizing perfectly. The production couldn`t be better on this one. The songs are more melodic than before and add something new or not seen that strong in the band’s sound during the past albums. And they wrote some killer tracks again, some still to be found in their live set. For me one of their best releases and a really underrated album. Get it. (DPF)

Envenomed is more than probably the most violent output by Malevolent Creation. Its predecessor, The Fine Art of Murder album displayed a more complex and catchy if we want, approach to this genre and featured a long length, while with this one we return to the sheer power of Eternal and In Cold Blood, but with a better production. Malevolent Creation are now a well-established band in death metal and you cannot go wrong if you are searching for your daily dosage of brutal death metal with always an eye to thrash. ..
– read full review @Metal-Archives.com –