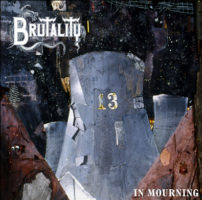 1. Obsessed
2. The Past
3. Destroyed By Society
4. Waiting To Be Devoured
5. Died With Open Eyes
6. In Mourning
7. Subjected To Torture
8. Calculated Bloodshed
9. Extinction

Produced by Jim Morris and Brutality

Jerry Outlaw: Guitar solos on “The Past” & “Subjected To Torture”

Brutality are one of those bands that got lost in the mix. Morbid Angel, Cannibal Corpse, and Death took all of the glory in Tampa, while Brutality just kept pumping out solid releases.
– read full review @Metallum –

After successfully releasing their first new full length in 20 years Repulsive Echo are reissuing the band’s rare gem “In Mourning”. Now “In Mourning” was released in 1996. At this time metal was at an evolving stage, the heyday of death metal was just finishing…
– read full review @BRUTALISM.COM –