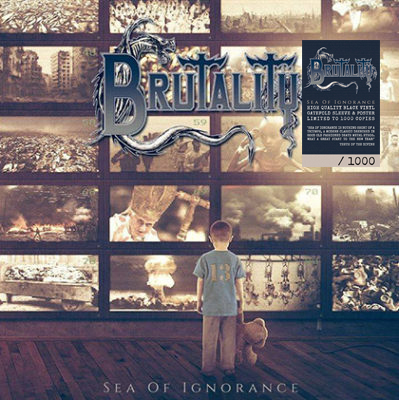 All music and lyrics written by Brutality, except “Shores in Flames” by Bathory.

The greatest achievement of Sea of Ignorance is that given 20 years of advancement in recording technology have past, the band have successfully retained the integrity of the sound of their classic material that could have very much been mired by modern recording techniques. This has thankfully been avoided and while still crushingly heavy, the warmth and clarity within the sound that made When the Sky Turns Black such a classic is still there. Sea of Ignorance is nothing short of a triumph, a modern classic drenched in good old fashioned death metal ethos. What a great start to the new year!
– read full review @teethofthedivine.com –

For those unfamiliar with Brutality, these guys are one of the oldest Florida death metal bands still around. They were formed in 1987, released their debut and masterpiece “Screams of Anguish” six years later, and released two more full lengths in ’94 and ’96.
The music itself sounds incredible. The guitars have the right amount of crunch, and lay on top of each other perfectly. So many times, one guitar keeps a steady rhythm underneath everything, generally matched by the kick drums, and another plays an intricate melodic riff over the top to give the song more spice. Without one or the other, the sound would fall flat. The vocals are well-mixed and easy to understand, and the bass pops up on occasion to add another dimension most bands in this style lack. The songs are structured like most classic death metal, centering on a specific riff or idea that is twisted into multiple shapes throughout the songs various turns.
– read full review @metal-archives.com –

This new Brutality is more or less a measured balance of slower, double bass drumming death metal roil patterns, a little lumbering death/doom, and some spry melodic death integration in a few of the faster tremolo picked guitar harmonies which offers a welcome relief against this ever becoming dull. Leads are well structured and catchy, revealing both classical and bluesy orientations that work well against the brutal rhythm riffing, especially in cuts like “Fatal Cure”; and it’s good they do, because without this element I feel this might become a painstakingly average affair since there is simply little creativity in revisiting the blueprints so long left behind and not tweaking or twisting them in any new combination. The broad gutturals and snarls of Reigel and Acres are not the most distinct in death metal, and almost all the important atmosphere created throughout the original tunes would be nowhere without all those harmonies and controlled shredding passages. They truly elevate the experience, the product of some good decision making.
– read full review @metal-archives.com –