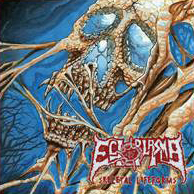 1. Human Taxidermy
2. Skeletal Lifeforms
3. Slain Meat for the Beast
4. Awakened in the Coffin
5. Towards the Shrouded Infinity (DEMIGOD)

All music and lyrics written and arranged by Ectoplasma
Recorded at Underground Studio at Nikaia City
Mixed and Mastered by Kyriakos Pagoulatos (Kontoven)
Artwork made by the mighty fleshworker Konstantinos The Monk
Track 3 Slain Meat For the Beast :
The intro is taken from Clive Barker’s 90’s movie ‘’Nightbreed’’
Track 5 Towards the Shrouded Infinity :
All rights belong to the almighty Finnish Gods of Death Metal, Demigod!

Hailing from Greece Ectoplasma certainly doesn’t mess around having only just released their full length debut they already following it up with an EP. Ectoplasma play old school death metal and make you feel like you are back in 1991…
– read full review @brutalism.com –

Leimy will go mad for the awesome Demigod-Cover „Towards the shrouded infinity“ at the end of this greek EP. And this is more creative than the „Pagan Savior“-cover of the unfortunately only digital album „Spitting Coffins“. The Quartet is totally in love with cassettes like on the demo „Everlasting deathreign“ or the split with the blasting-command Hatevomit. Fans of the first godly albums of Brutality will directly fall in love with the epic song „Awakened in the coffin“. The guitar-leads are shredding everything before it accelerates to the max at the end and also the intro „Human taxidermy“, the title-track and „Slain meat for the beast“ are absolutely awesome. Someone really has to release this hidden gem on Vinyl and CD soon…
– read full review @DEAF FOREVER – Björn Thorsten I came across Greek ECTOPLASMA when their demo “Everlasting Deathreign” was reissued by Underground Resistance, and I got hold of it from some obscure Greek label and distro by the name of Repulsive Echo Records. I guess Kostas also dug what he heard from the band, as he now has released an EP with the guys. ECTOPLASMA have also managed to release their debut full length a tad before the EP, on the Polish label Morbid Chapel Records, so do seek “Spitting Coffins” out with piece in mind, and let the unrest rule, a few seconds after you have pressed play. The band is hitting us hard with old school raw and grim Death Metal…
– read full review @VoicesfromtheDarkSide – Anders Peter Jorgensen Hailing from Greece, Ectoplasma is a newer band with an old school Death Metal sound in the vein of Autopsy and Avulsed and even a bit of old Hypocrisy. They’ve been busy since their inception in 2013. With one demo, one split LP, and one full length album under their belts, they are now spewing the sickness that is the SKELETAL LIFEFORMS EP upon us! I love a good Death Metal EP, so let’s see what these guys have to offer. The 5 song EP is quite varied with good basic brutal song…