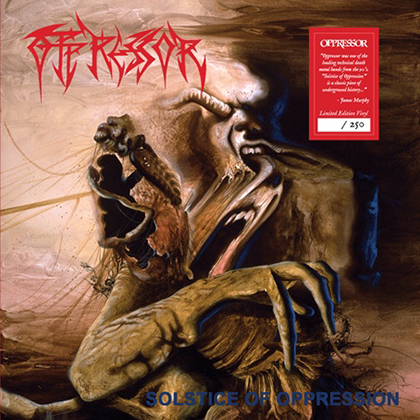 Overall this album is a MUST for any death metaller, as well as people not into death metal. The musicianship on this album is unrivaled, and this album shouldn’t just be labeled “The Greatest Death Metal Album Ever Released” but should also be considered as one of the best overall albums ever released. Period! Just check it for yourself and see.
– read full review @metal-archives.com –

You may be forgiven for not remembering Oppressor, while they released three amazing albums in the 90s, they never quite got the recognition they deserved, whether it be through a lack of label promotion or a lack of self-promotion through the live circuit, I am not certain. What I am sure of is their small discography remains classic within death metal’s history, at a time when the genre was at its least popular. Many people would perhaps be more familiar with the band formed by three quarters of Oppressor’s line up, along with Broken Hope’s Shaun Glass after the band’s demise. Soil enjoyed moderate success and a heavy rotation on MTV in the early 2000s with their radio-friendly brand of hard rock, but that is just a side note.
– read full review @teethofthedivine.com –

The Greek label Repulsive Echo, which are about to become specialized in reviving old Death Metal classics, never before to be found on vinyl, on vinyl, have started working on their third release. The first ever vinyl version of the American technical Death Metal band from Chicago OPPRESSOR’s legendary debut full length “Solstice Of Oppression”, originally released on CD by Red Light Recordsin 1994. I got into the band with the release of “Agony” in 1996 by Olympic Recordings, which also released the band’s third and final album “Elements Of Corrosion” in 1998, before the band called it quits. Though now will the first and extremely well performed album finally be available on vinyl.
– read full review @nocturnalhorde.com –