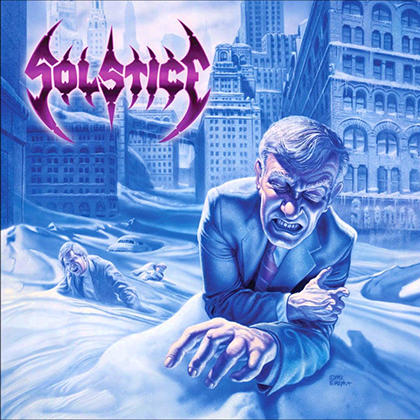 B1 S.M.D. (Carnivore cover)
B2 Netherworld
B3 Plasticized
B4 Catalysmic Outburst
B5 Aberration

Sometimes an album’s greatness will announce itself simply by who is involved in its creation and the time and place that it was put together. That is the message that is screamed out at any fan of thrash metal and old school death metal that comes across the wrecking machine of a debut that is Solstice’s self-titled 1992 classic. Born in the heart of the then booming Florida death metal scene, comprised of members that had involvement with the likes of Malevolent Creation, Demolition Hammer and Monstrosity at some point either before or immediately following this album, and fronted by later guitarist of Cannibal Corpse Bob Barrett, this stands as one of the most intense, and definitely among the more underrated albums to come out of the early 90s. One could even go so far as to muse over considering this one of the best, if not thee best album to feature the person of Scott Burns as engineer.
– read full review @metal-archives.com –

Right here we have one of the most brutal and barbaric death/thrash releases from the “morrisound era” of the early 90s… This album is a lesson in absolute anger, hate, and maliciousness! The music here is simply ABRASIVE. From the first song through the last, the listener is repeatedly pummelled by an intense death/thrash assault that absolutely takes no prisoners! The tempo is upbeat, with lots of gallop riffs and downright thrashy mayhem that is similar to some other “morrisound” releases of the era (Devastation tx, Sindrome, Demoliton Hammer, etc. for example) – except solstice is much more in your face and brutal.
– read full review @metal-archives.com –